Sign up for our email list and get automatically
entered to win a free shirt* of your choice PLUS get great deals and promotions delivered to your inbox!
dancer T-Shirts

White Mens dancer T-shirt
Dynamically designed by you based off your unique search, this customizable, casual and loose fitting t-shirt will quickly become one of your favorites. Made from 6.0 oz, pre-shrunk 100% cotton, it wears well on anyone. We’ve double-needle stitched the bottom and sleeve hems for extra durability. 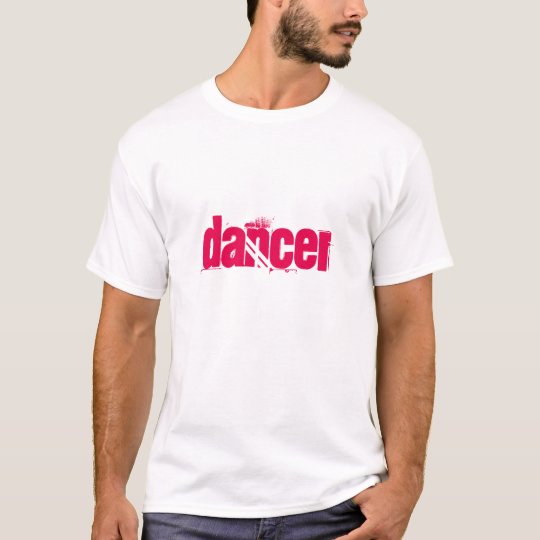 Red Lettering Modern dancer T-shirt. Dynamically designed by you, this customizable, heavyweight white t-shirt with red lettering. Custom letters stand out with bold red type and modern twist. Made from 6.0 oz, pre-shrunk 100% cotton, it wears well on anyone. We’ve double-needle stitched the bottom and sleeve hems for extra durability.

Black and Red dancer T-shirt
Dynamically created by you, this customizable, rocker shirt breaks the mold with its thin bright red artistic font. Made from 6.0 oz, pre-shrunk 100% cotton, it wears well on anyone. We’ve double-needle stitched the bottom and sleeve hems for extra durability.

Girls Natural Handwriting dancer T-shirt
Dynamically designed by you, this customizable tshirt is sure to become a personal favorite. This Women's T-Shirt has a relaxed, with beautiful handwriting font design. Its incredible softness will keep you comfortable no matter what you are up to. Wear it by itself or under a sweater.

Just Dance (for light colors) T-Shirt
A tee for dancers and dance-lovers alike. Features original digital artwork, exclusive to Attack of the Exclamation Points. If you'd like to have this design printed on a dark-colored tee, see our "Just Dance (for dark colors)" T-shirt. (And don't forget: it's customizable!)

Dance T-Shirt
An original gesture illustration of a female dancer with the word "Dance" in loose script type.

Do You Even Lift? Male Dancer Shirt
For the male dancer in your life!

HorseShoes-Value Pole Dancers T-Shirt
An affordable alternative heavyweight t-shirt for the value conscious consumer. Pre-shrunk and made from 5.5 oz 100% heavyweight cotton. It also has double-needle stitched bottom and hems for extra durability.

Dancers Kick Butt Destroyed T-shirt
Know somebody who would like this? Be a friend and e-mail this page to them. Like what you see? Be sure to sign up for the Fan Club. That way you'll be the first to know about new products when they are posted.

Sun Dancer NAHM T-Shirt
One-third of the 2,786,652 Native Americans in the U.S. live on reservations in California, Arizona and Oklahoma. The largest tribes by population are Navajo, Cherokee, Choctaw, Sioux, Chippewa, Apache, Lumbee, Blackfoot, Iroquois and Pueblo. National Native American Heritage Month honors and recognizes the people who have been an integral part of the American character; who have endured, and remain, a vital cultural, political, social, and moral presence.

5678 Dance Top
Gorgeous top for dancers and dance teachers with "and 5678" in fun typography. For dancers of all styles including Jazz, Ballet, Modern, Hip-Hop, Zumba, Nia...

Not Funny Theater Lighting Men's Dark T T-Shirt
Every wonder what happens when you're not nice to the lighting crew? You may find yourself in the dark on stage.

Irish Dancer T-Shirt
Show off your love for Irish Dance with this fun design.