Sign up for our email list and get automatically
entered to win a free shirt* of your choice PLUS get great deals and promotions delivered to your inbox!
islamic T-Shirts

White Mens islamic T-shirt
Dynamically designed by you based off your unique search, this customizable, casual and loose fitting t-shirt will quickly become one of your favorites. Made from 6.0 oz, pre-shrunk 100% cotton, it wears well on anyone. We’ve double-needle stitched the bottom and sleeve hems for extra durability. 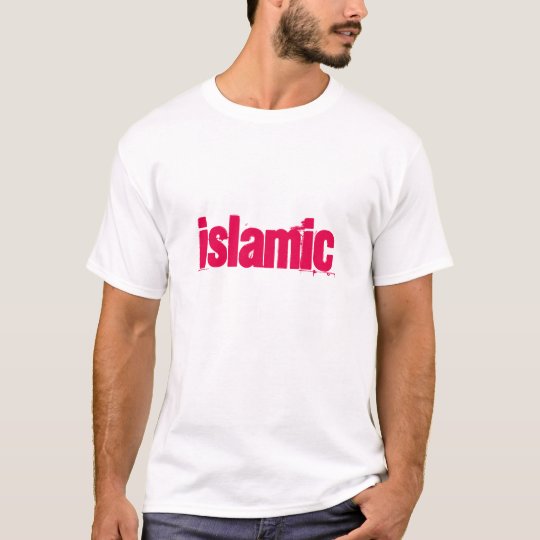 Red Lettering Modern islamic T-shirt. Dynamically designed by you, this customizable, heavyweight white t-shirt with red lettering. Custom letters stand out with bold red type and modern twist. Made from 6.0 oz, pre-shrunk 100% cotton, it wears well on anyone. We’ve double-needle stitched the bottom and sleeve hems for extra durability.

Black and Red islamic T-shirt
Dynamically created by you, this customizable, rocker shirt breaks the mold with its thin bright red artistic font. Made from 6.0 oz, pre-shrunk 100% cotton, it wears well on anyone. We’ve double-needle stitched the bottom and sleeve hems for extra durability.

Girls Natural Handwriting islamic T-shirt
Dynamically designed by you, this customizable tshirt is sure to become a personal favorite. This Women's T-Shirt has a relaxed, with beautiful handwriting font design. Its incredible softness will keep you comfortable no matter what you are up to. Wear it by itself or under a sweater.

Assalaamu 'alaikum T-Shirt
Spread salaams and introduce people to the peace of Islam.

The Rashidun Caliphs T-Shirt
They are "Khulafaur Rasyidin" is the best generation after prophet Muhammad Peace be upon him died The Rashidun Caliphs (Rightly Guided Caliphs; Arabic: ??????? ????????? al-Khulaf??u ar-R?shid?n), often simply called, collectively, "the Rashidun", is a term used in Sunni Islam to refer to the 30-year reign of the first four caliphs (successors) following the death of the Islamic prophet Muhammad, namely: Abu Bakr, Umar, Uthman ibn Affan, and Ali of the Rashidun Caliphate, the first caliphate. The concept of "Rightly Guided Caliphs" originated with the later Abbasid Caliphate based in Baghdad. It is a reference to the Sunni imperative "Hold firmly to my example (sunnah) and that of the Rightly Guided Caliphs" (Ibn Majah, Abu Dawood).[1]

True Islam - (Black) by Supreme ROYALTY T-Shirt
True masters of Islam practice self law and self confidence with every lesson learned...part of the Spoken Word Collection

Property of Allah - Mike Tyson Sweatshirt
Inspired by the great boxer Mike Tyson. Although a bit pricey compared to other products this one has been made on request. Please do look through more of our products. Thank you!

Ooops! I Broke my Wudu Again! Baby Bodysuit
Cute outfit that helps your baby express how they really feel!

Masha'allah Baby Bodysuit
An Arabic phrase that expresses appreciation, joy, praise or thankfullness for an event or person that was just mentioned. Towards this, it is used as an expression of respect, while at the same time serving as a reminder that all accomplishments are considered by Muslims to be achieved by the will of Allah. It is generally said upon hearing good news.

Alhamdulillah Islam Muslim Mens T-Shirt
Al-?amdu lill?h (All Praise and Thanks to God)

Deus Vult T-Shirt
"Deus vult" is Latin for "God wills it" and it was the cry of the people at the declaration of the First Crusade by Pope Urban II at the Council of Clermont in 1095.