Sign up for our email list and get automatically
entered to win a free shirt* of your choice PLUS get great deals and promotions delivered to your inbox!
carrillo T-Shirts

White Mens carrillo T-shirt
Dynamically designed by you based off your unique search, this customizable, casual and loose fitting t-shirt will quickly become one of your favorites. Made from 6.0 oz, pre-shrunk 100% cotton, it wears well on anyone. We’ve double-needle stitched the bottom and sleeve hems for extra durability. 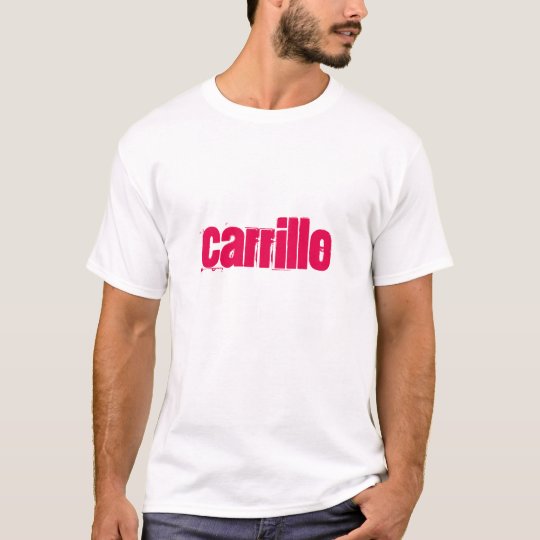 Red Lettering Modern carrillo T-shirt. Dynamically designed by you, this customizable, heavyweight white t-shirt with red lettering. Custom letters stand out with bold red type and modern twist. Made from 6.0 oz, pre-shrunk 100% cotton, it wears well on anyone. We’ve double-needle stitched the bottom and sleeve hems for extra durability.

Black and Red carrillo T-shirt
Dynamically created by you, this customizable, rocker shirt breaks the mold with its thin bright red artistic font. Made from 6.0 oz, pre-shrunk 100% cotton, it wears well on anyone. We’ve double-needle stitched the bottom and sleeve hems for extra durability.

Girls Natural Handwriting carrillo T-shirt
Dynamically designed by you, this customizable tshirt is sure to become a personal favorite. This Women's T-Shirt has a relaxed, with beautiful handwriting font design. Its incredible softness will keep you comfortable no matter what you are up to. Wear it by itself or under a sweater.

Joseph Carrillo Tank Top
A tank top promoting Joseph Carrillo, Famous Singer-songwriter of the "Ultimate Celebrity Blackout" Music Album. Joseph Whitfield Carrillo (born June 11, 1989) is an American Singer-songwriter, and Actor from Santa Clara County, CA, who created the 2018 "Pop, A Cappella" LP album Ultimate Celebrity Blackout. The album's lyrics are against censorship and blackouts of Celebrities hence the albums name. "Ultimate Celebrity Blackout" is about preventing media Blackouts and censorship while promoting free-speech and free-press. Carrillo has also released music videos which he starred in including Don't Black Me Out and You Don't Need School to be a Celebrity, he currently uploads videos on his YouTube channel about various topics including singing and acting.

CARRILLO Funny Surname Family Tree Birthday Reunio T-Shirt
Cool artwork with the saying "Carrillo Limited Edition" is a perfect gift or present for any men or women you want to surprise. Buy the design now!

Zayne Carrillo Hoodie
In honor of Zayne Carrillo. He touched the hearts of many. It was never a dull moment with him. This isn't a final goodbye, just a see you later.