Sign up for our email list and get automatically
entered to win a free shirt* of your choice PLUS get great deals and promotions delivered to your inbox!
fiction T-Shirts

White Mens fiction T-shirt
Dynamically designed by you based off your unique search, this customizable, casual and loose fitting t-shirt will quickly become one of your favorites. Made from 6.0 oz, pre-shrunk 100% cotton, it wears well on anyone. We’ve double-needle stitched the bottom and sleeve hems for extra durability. 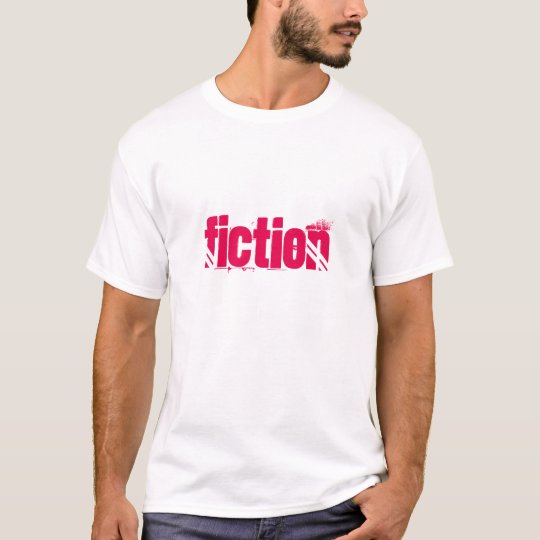 Red Lettering Modern fiction T-shirt. Dynamically designed by you, this customizable, heavyweight white t-shirt with red lettering. Custom letters stand out with bold red type and modern twist. Made from 6.0 oz, pre-shrunk 100% cotton, it wears well on anyone. We’ve double-needle stitched the bottom and sleeve hems for extra durability.

Black and Red fiction T-shirt
Dynamically created by you, this customizable, rocker shirt breaks the mold with its thin bright red artistic font. Made from 6.0 oz, pre-shrunk 100% cotton, it wears well on anyone. We’ve double-needle stitched the bottom and sleeve hems for extra durability.

Girls Natural Handwriting fiction T-shirt
Dynamically designed by you, this customizable tshirt is sure to become a personal favorite. This Women's T-Shirt has a relaxed, with beautiful handwriting font design. Its incredible softness will keep you comfortable no matter what you are up to. Wear it by itself or under a sweater.

Royale with Cheese T-Shirt
If you're in France and need quick burger, there's only one choice.

Stephen King, Constant Reader T-Shirt
This is probably our most popular design. It sells frequently even years after its debut.

Salty Squid Men's T-Shirt
The Salty Squid is one of the oldest taverns in Leviathan City having been established in 1536 by its owner Angus McCay.

GENRE FLUID: for book lovers who read wide T-Shirt
Declare you allegiance to a wide varieties of book genres! Refuse to be pigeon holed. Read widely! Science fiction, fantasy, young adult, steampunk, romance, even non-fiction. You can read it all! For librarians, readers, book fans, bookstgram, and everything else.

Make Orwell Fiction Again Big Brother Eye 1984 T-Shirt
Are you looking for a birthday, christmas or graduation gift for your philosophy or literature teacher, professor or fellow student? Find sophisticated and ironic designs for your friends and family, book lovers and nerds alike.

Commando Cody/Rocketman t-shirt
A top inventor with military connections, Cody developed a rocket suit, a spaceship, and a blaster pistol. When the leader of the Moon Man, Retik, decides to conquer the Earth and had his agents attack strategic locations, Cody springs into action to save the day! This classic suit, which originally appeared in "Radar Men from the Moon," was so well designed and popular that it was used again in "King of the Rocket Men" and "Zombies of the Stratosphere," and was the inspiration for the Captain Proton character on "Star Trek: Voyager." With this shirt, you may not be able to fly, but you just might feel like you can!

Quizat Haderach T-Shirt
If you don't know what this means you're not going to want the shirt. Suffice to say it's a quote from SF novel Dune by Frank Herbert.

I love you man. T-Shirt
A squirrel looks directly into the camera and proclaims with fist on heart, "I love you man".

Beartown Hockey Benji Ovich T-Shirt
My favorite hockey player is a fictional character. If you've read Fredrik Backman's novel, Beartown, (and don't miss his follow-up, Us Against You), you know just how endearing Benji Ovich is. I couldn't resist creating a shirt that shows my affinity - and yours - for the Beartown hockey team, and especially #16.

Eviscerate in Fiction t-shirt
This is why you shouldn't anger a novelist.