Sign up for our email list and get automatically
entered to win a free shirt* of your choice PLUS get great deals and promotions delivered to your inbox!
leaders T-Shirts

White Mens leaders T-shirt
Dynamically designed by you based off your unique search, this customizable, casual and loose fitting t-shirt will quickly become one of your favorites. Made from 6.0 oz, pre-shrunk 100% cotton, it wears well on anyone. We’ve double-needle stitched the bottom and sleeve hems for extra durability. 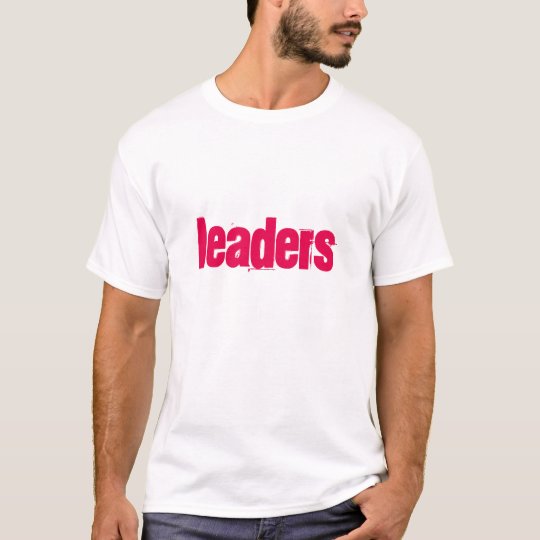 Red Lettering Modern leaders T-shirt. Dynamically designed by you, this customizable, heavyweight white t-shirt with red lettering. Custom letters stand out with bold red type and modern twist. Made from 6.0 oz, pre-shrunk 100% cotton, it wears well on anyone. We’ve double-needle stitched the bottom and sleeve hems for extra durability.

Black and Red leaders T-shirt
Dynamically created by you, this customizable, rocker shirt breaks the mold with its thin bright red artistic font. Made from 6.0 oz, pre-shrunk 100% cotton, it wears well on anyone. We’ve double-needle stitched the bottom and sleeve hems for extra durability.

Girls Natural Handwriting leaders T-shirt
Dynamically designed by you, this customizable tshirt is sure to become a personal favorite. This Women's T-Shirt has a relaxed, with beautiful handwriting font design. Its incredible softness will keep you comfortable no matter what you are up to. Wear it by itself or under a sweater.

Leader of The Pack T-Shirt
Leader of the Pack design by the Textees Co.

Harriet Tubman: Liberator T-Shirt
Harriet Tubman (born Araminta Ross) was an African-American abolitionist, humanitarian, and Union spy during the American Civil War. After escaping from slavery, into which she was born, she made thirteen missions to rescue more than 70 slaves using the network of antislavery activists and safe houses known as the Underground Railroad. She later helped John Brown recruit men for his raid on Harpers Ferry, and in the post-war era struggled for women's suffrage.

RAID LEADER Tattoo - Sword, Axe, and Shield T-Shirt
Represent that special RAID LEADER in your life (even if it's actually you)! Dragon emblem shield paired with a sword and an axe. Blood splatter added for extra fun.

Obama GREATNESS Lincoln FDR JFK Obama T-shirt
shirt has black and white photos of Lincoln, FDR, JFK, and Obama with the word GREATNESS stretched out above them.

Guardians of the Galaxy | Star-Lord Retro Comic T-Shirt
Check out this retro comic inspired art for Star-Lord! Personalize your Star-Lord gear by clicking the customize button to get started! Add your own caption or name by adding text, or resize the image to focus on your favorite part!

Leader Of The Future NAHM T-Shirt
One-third of the 2,786,652 Native Americans in the U.S. live on reservations in California, Arizona and Oklahoma. The largest tribes by population are Navajo, Cherokee, Choctaw, Sioux, Chippewa, Apache, Lumbee, Blackfoot, Iroquois and Pueblo. National Native American Heritage Month honors and recognizes the people who have been an integral part of the American character; who have endured, and remain, a vital cultural, political, social, and moral presence.

Drill_Sergeant T-Shirt
Great shirt for all Drill Sergeants. Identify yourself on the PT field or during Combatives training. Free Customization! Add your company/battalion/motto on the front!

Princess Leia | Rebel Collage T-Shirt
Star Wars Classic: Princess Leia | This iconic photo of Princess Leia with her Blaster Pistol is stylized in this Rebel Alliance collage, featuring X-Wing fighters, Rebellion Symbol, and splashes of color. | Join Leia Organa on her journey from princess to general with officially licensed Star Wars merchandise. Rescued at birth by Senator Organa and subsequently adopted into his family, the royal family of Alderaan, Leia became a princess embroiled in the rebellion against the Empire. Despite capture, witnessing the destruction of her own planet, becoming a hero of the rebellion and later, the general of the resistance, Leia shows her resilience as she tries to save the galaxy from the shadow of her true family's dark legacy.