Sign up for our email list and get automatically
entered to win a free shirt* of your choice PLUS get great deals and promotions delivered to your inbox!
science fiction T-Shirts

White Mens science fiction T-shirt
Dynamically designed by you based off your unique search, this customizable, casual and loose fitting t-shirt will quickly become one of your favorites. Made from 6.0 oz, pre-shrunk 100% cotton, it wears well on anyone. We’ve double-needle stitched the bottom and sleeve hems for extra durability. 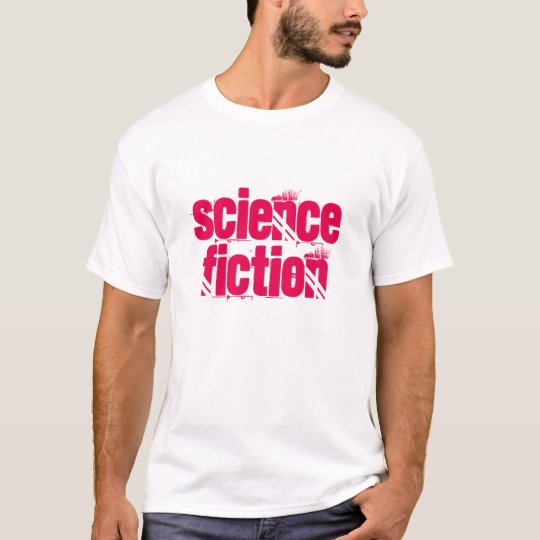 Red Lettering Modern science fiction T-shirt. Dynamically designed by you, this customizable, heavyweight white t-shirt with red lettering. Custom letters stand out with a their bold red type and modern twist. Made from 6.0 oz, pre-shrunk 100% cotton, it wears well on anyone. We’ve double-needle stitched the bottom and sleeve hems for extra durability.

Black and Red science fiction T-shirt
Dynamically created by you, this customizable, rocker shirt breaks the mold with its thin bright red artistic font. Made from 6.0 oz, pre-shrunk 100% cotton, it wears well on anyone. We’ve double-needle stitched the bottom and sleeve hems for extra durability.

Girls Natural Handwriting science fiction T-shirt
Dynamically designed by you, this customizable tshirt is sure to become a personal favorite. This Women's T-Shirt has a relaxed, with beautiful handwriting font design. Its incredible softness will keep you comfortable no matter what you are up to. Wear it by itself or under a sweater.

Stephen King, Constant Reader T-Shirt
This is probably our most popular design. It sells frequently even years after its debut.

Asimov's Three Laws of Robotics & the Zeroth Law T-Shirt
The Three Laws, quoted from Isaac Asimov's "Handbook of Robotics, 56th Edition, 2058 A.D." In later fiction where robots had taken responsibility for the government of whole planets and human civilizations, Asimov also added a fourth, or zeroth law, to precede the others: Zeroth Law A robot may not harm humanity, or, by inaction, allow humanity to come to harm. The Three Laws, and the zeroth, have pervaded science fiction and are referred to in many books, films, and other media. They have impacted thought on the ethics of artificial intelligence as well.

Shoelace Girl - White - Pegasus- T-Shirt
Shoelace Girl (text in white) from The Atlantis Grail Series on the front, Pegasus image and "Qualify or Die" on the back. Basic t-shirt -- pick your color.

Vintage Science Fiction Robot with Laser Beam Eyes T-Shirt
Vintage illustration futuristic Science Fiction laboratory image. A retro 50s sci fi comic book design with a giant robot shooting laser beams from his eyes trying to get at the miniature scientist with a gun trapped in a glass jar in the lab.

Starstruck T-shirt - When Harry Met Annie
Bartender Harry Palmer, ex-rebel, ex-mercenary "proldier" with Erotica Ann 333, a droid whose beauty is only exceeded by her brain power. Sometimes dark, often hilarious and always surprising, Elaine Lee and Michael Kaluta's Starstruck is a visually stunning futuristic fantasy in which the offspring of two powerful houses vie for wealth and dominance in a newly free, but completely anarchic universe. Art by Michael Kaluta, painted by Tym Stevens.

AREA 51- Coordinates T-Shirt
Here are the real coordinates for the infamous 'Area 51' in the Nevada Desert, ok, it might sound like a dumb idea but if your a bit of a geek like me you'll think it's pretty cool.

Pirate Skull Tie Dye Tee
From our Curious Whimsy Collection, intricate and colorful illustrations from the center of imaginarium?s realm. Just one of the many original designs from All Us All the Time.